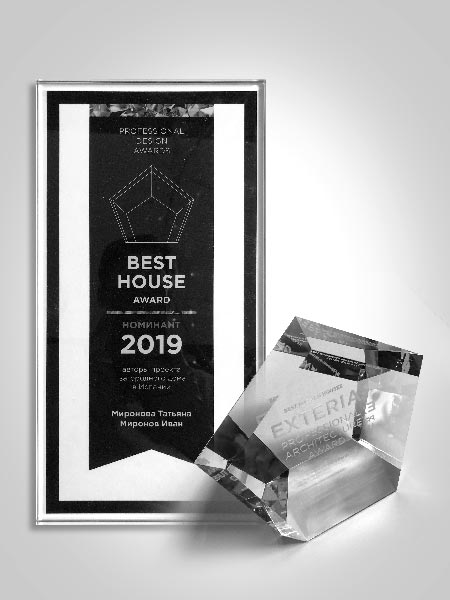 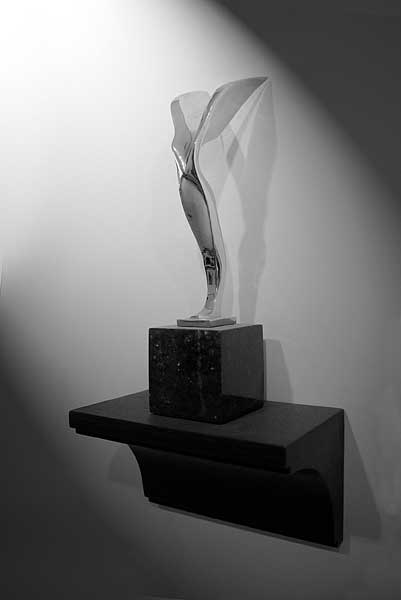 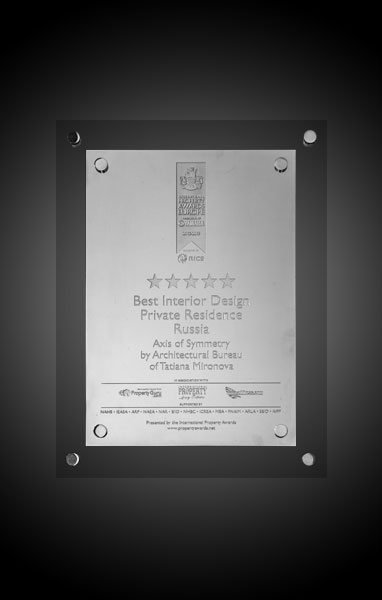 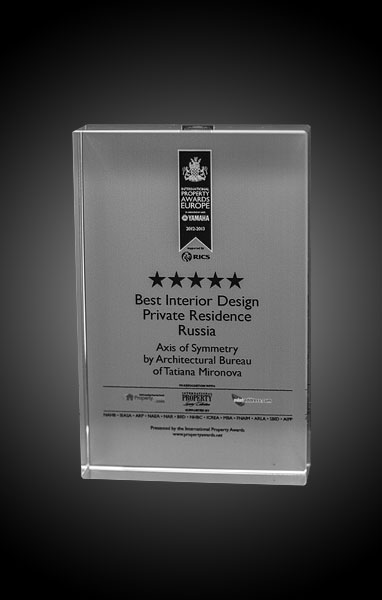 The projects of the Architectural Bureau of Tatiana Mironova "Axis of Symmetry" and "House for All Seasons" were awarded the prestigious awards of the competition in the categories Best Interior Design and Interior Design. "Such high marks from the jury of the International Property Awards Europe in two nominations at once - for us another important step, denoting that we are moving in the right direction. Job bureau to create luxurious and comfortable interiors was appreciated by professionals of the highest level. we competed with the strongest and talented teams from around the world, which makes the awards received the most valuable for us ", - commented on the event General Director of the Architectural Bureau Tatyana Mironova.

"The axis of symmetry" - a modern large house with spacious terraces, which Tatiana Mironova attached to the living area and placed there a billiard room and a huge bedroom of 200 square meters, which impressed the jury with its size and originality of performance. The space of each room in the house was built symmetrically along the axis, massive furniture, decorative elements, original Upholstery prints brought a bit of mischief to the conservative classics and art deco, which stylistically allowed to create a whole, unique image of the entire object. The idea of ​​the “House for All Seasons” project was to combine what was previously not considered possible. to connect. Tatyana Mironova successfully combines materials, styles and elements, creating a single, harmonious space: tinted solid wood with edged embossed pattern, sparkling in the light, a mixture of art deco, modern and art nouveau elements. The extraordinary design gives the house a refined and discreet look, not subject to the influence of time.

The European Property Awards competition involves the best projects in the field of residential and commercial real estate from all countries of the world. Each country has its own competition tour. European winners, along with winners from Arab countries, Middle East, USA, South America, Africa and Asia Pacific become nominees in the world famous International Property Awards, which in the 19 years of its existence has become the most prestigious competition in the field residential and commercial real estate. At the next, final stage, the authors of projects in each of the categories who received in International Property Awards, the highest rating of "Five Stars", will compete for the title of World’s Best - the best in the world design project 2012-2013. Winners will be announced in the final, which will be held at the Grosvenor House Hotel, Park Lane, London in December 2012.

The architectural bureau of Tatiana Mironova, which received the coveted “Five Stars” one of the two awards, will take part in the upcoming the final!

The architectural bureau of Tatiana Mironova was created in 1996 as a design bureau at Mosproekt-3.

In 2004, the bureau separated itself from Mosproject and received its current status. Over the years, more than 150 projects have been completed: private mansions, interiors of apartments, offices, shops, sports and entertainment complexes.

In 1992-1996, Tatyana Mironova realized herself as an artist, an expert in arts and crafts. Since 1996 of the year is engaged only in architecture and interior design, since 2004 she has been running her own architectural workshop.

He constantly works on his creative growth, closely follows news and news in the field of architecture and design: annually visits the International Furniture Salon in Milan, High Point, furniture exhibitions in Paris and Cologne, Parisian salons Maison & Object, exhibitions in Bologna and Verona.

For 16 years of work, the Architectural Bureau of Tatiana Mironova has implemented more than 150 design - projects of real estate objects of different level of complexity and purpose: private residences, mansions, apartments, boutiques, office space and entertainment complexes. Unique solutions and the highest level of execution, combined with innovation - the distinguishing features of all the work of Tatiana's team Mironova.

The architectural bureau of Tatiana Mironova has many Russian and international awards.

The European Property Awards was established in 1995 and is considered one of the most prestigious awards of the European real estate market. It is awarded to companies operating in all sectors of residential and commercial real estate. For the award are nominated nominees from the following regions: Africa, Asia-Pacific, Arabia, Canada, Caribbean countries, countries Central and South America, Europe, UK and USA. The jury of the International Property Awards includes 60 international experts in the field of real estate, many of which represent reputable companies from different countries.